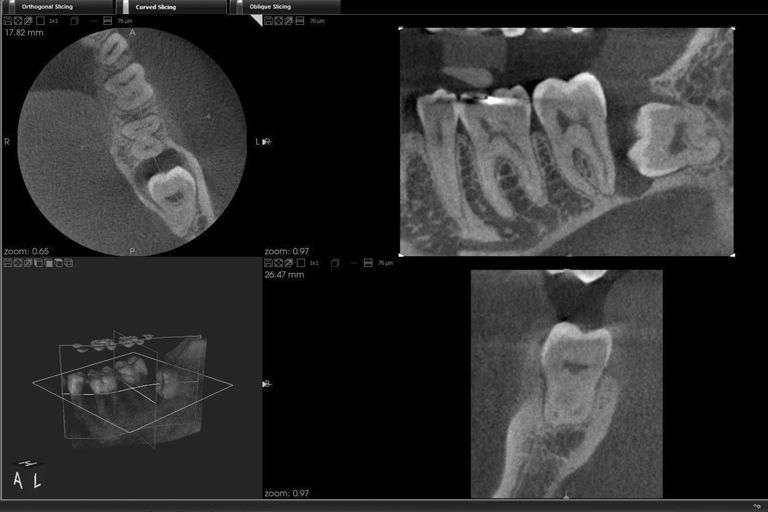 Our four wisdom teeth are the last of the permanent teeth – by the time of their emergence as well as by their location as tooth number eight (the third molar) in each of the four quadrants of the jaw. The tooth germs from which the wisdom teeth develop may be discernible as late as in the first years of the second decade, and the mature teeth usually erupt sometime in the third decade of life. Then, you may well be a lot wiser than you were at seventeen. But that doesn’t necessarily mean there is room for your third molars.

From an evolutionary point of view, our wisdom teeth are what is called a rudiment – a remnant from times when our ancestor’s jaws where considerably wider than ours are today. All in all, “modern” jaws tend to be somewhat too small for the eighth teeth. Given that, it is not a very big loss that they don’t even develop in some people. In people with wisdom teeth, a lack of space leading to the late comer’s failure to properly grow into the tooth arch is not a rare ocurrence. Then, some or all of them may erupt only partially – that is referred to as partially impacted/partially erupted wisdom teeth, or not at all (impacted or retained wisdom teeth).

An impacted wisdom tooth often sits quietly in the jaw, making no trouble at all. Then it is most wisely just left alone. However, sometimes retained wisdom teeth may be rotated in the jaw, become wedged and start pressing against the roots of the neighboring molars. This pressure can displace teeth and/or become the source of chewing problems and chronic pain in the jaw area that may radiate to the ears or head. In those cases, your dentist will most probably advise the removal of the impacted third molar.

A partially impacted wisdom tooth has started to erupt, but became stuck for lack of room. It is still partially covered with a gingival “hood” that poses an extreme challenge for dental hygiene, trapping food residue and allowing bacteria to thrive under its cover. The resulting chronic gum inflammation can develop into a painful abscess. Periodontitis and caries risks are elevated. Thus, partially impacted wisdom teeth are clear candidates for removal.

Marlene Dietrich had her wisdom teeth removed to give her face that trademark hollow-cheeked chic… But generally, there is no need to extract a normally erupted wisdom tooth that has enough room in the jaw. Medical reasons for removal of third molars are mostly the same as with other teeth: fractures, and recurring root inflammations after failed root canal treatments and revisions. Due to their “remote” position, wisdom teeth are harder to clean and thus suffer from caries and pulpitis somewhat more frequently than their easier-to-reach neighbors.

Modern endodontics offer a good chance to stop root infections and preserve wisdom teeth in a devital, but painfree and functional state. And that may prove very useful one day: Even if your wisdom tooth seems somewhat superfluous at the moment, a time may come when you will be quite happy to have it serve as an anchor for a bridge construction. However, there actually are some medical reasons for the extraction of healthy wisdom teeth. Elongated wisdom teeth have no antagonist in the opposite jaw and have grown too long as a result of this situation. They impede chewing and may cause functional problems with the jaw muscles, and nighttime bruxism.

Wisdom teeth that grow at an angle, crowd their neighbors or will likely do so in the future must be closely watched and may become candidates for extraction, too. If there is no alternative to extraction, dentist and patient must brace themselves for a bit more pulling and levering: Wisdom teeth sometimes have crooked or fused roots which potentially make their extraction somewhat harder than that of other teeth.

Removing an impacted or partially impacted wisdom tooth requires opening up the jaw bone. This outpatient procedure may be performed under local anaesthesia, sedation, or in complicated cases under general anaesthesia. Performing a so-called osteotomy procedure, the oral surgeon will cut and open up a gum flap over the location of the wisdom tooth, and carefully mill a small “window” into the jaw bone with rotating instruments, thus making the impacted tooth accessible from the outside.

The tooth is then removed, whereby it may be prudent to cut it in several small pieces and take them out one by one. The wound is cleaned from bone and tooth debris and closed by reattaching the flap with a surgical suture. A wad of surgical gauze is placed over the wound that may not be exchanged during the first half hour after the operation, lest blood coagulation be disturbed.

Prior to becoming an actual tooth in the jaw, each wisdom tooth is a tooth germ – a nonmineralized, soft predecessor of a tooth. From on orthodontic point of view, it may sometimes be advisable to remove a wisdom tooth germ. This is the case when it can be clearly predicted that the jaw will never offer enough space for 16 teeth and, once mineralized, the wisdom teeth would cause the other teeth to become crowded in the dental arch. Removing a tooth germ is a smaller intervention than removing an impacted tooth, so it saves the patient (and the remaining teeth, which will now face no shortage of room at any time) some future trouble.

What to expect after a wisdom tooth extraction or an osteotomy, and what you can do to promote healing

After the anaesthesia wears off, there will be pain – sometimes some pain, and sometimes considerable pain. To take the edge off that pain, it is advisable to preventively take some otc pain medication. Don’t use Aspirin or other medications with acetyl salicylic acid: This drug inhibits blood coagulation. Ibuprofen works well for most patients. If you are regularly taking anticoagulant medication (e.g. to prevent thrombosis), you will be temporarily switched to a less potent product prior to your wisdom tooth procedure.

Swellings are to be expected after most wisdom tooth extractions. Visible haematoma are not a rare side effect either. Pain, bleeding and swelling may be reduced through cooling: On the first day after the procedure , our advice is to constantly apply a towel that has been moistened with ice water, or a cool pack wrapped in a tea towel. The healing process starts when a clot of coagulated blood fills the open wound. As long as the wound is still bleeding, it is very important to disturb it as rarely as possible. The surgical gauze placed on the wound must not be exchanged until 30 minutes after the end of the procedure, and you may not spit out during that time either.

It is normal to experience some bleeding until twelve hours after the procedure. If the bleeding won’t stop, it may be helpful to place a brewed and cooled off black tea bag on the wound (black tea promotes healing via the astringent effect of the tannins it contains). A salt water rinse (one teaspoon of salt in 250 ml lukewarm water) is another option. Rinse carefully: Let the salt water sit in your mouth for a couple of minutes without sloshing it around, then carefully let it run out (don’t spit out with pressure!). When lying down, use one or two extra pillows: An elevated head position reduces the risk of bleeding.

Diet and other advice

In the first days after a wisdom tooth procedure you are not allowed to chew (at least not on the affected side of your mouth). A menu of pureed soups, shakes, joghurt – everything that “slides down” without chewing – accommodates that demand. Very important though: Never drink with a straw! The suction you are creating in your mouth may pull the blood clot from the empty tooth socket and endanger the healing process profoundly.

Stimulants that raise blood pressure (coffee, tea, energy drinks) increase the risk of bleeding, too. Alcohol inhibits blood coagulation, and nicotine prolongs the healing process. Better forego these smaller and bigger “vices”, stay clear of physical exertion and, if possible, don’t expose yourself to high temperatures (sauna, sun baths) during the healing period. By the way: If you have a choice, better have a wisdom tooth extraction or removal performed during a cooler season. On average, the sutures may be removed after a week.

At this point, pain and swellings have generally subsided as well, haematoma have mostly vanished and the whole affair will soon be a memory. Looking back on your wisdom tooth removal, you will be able to confirm that a painful end is indeed better than unending pain.