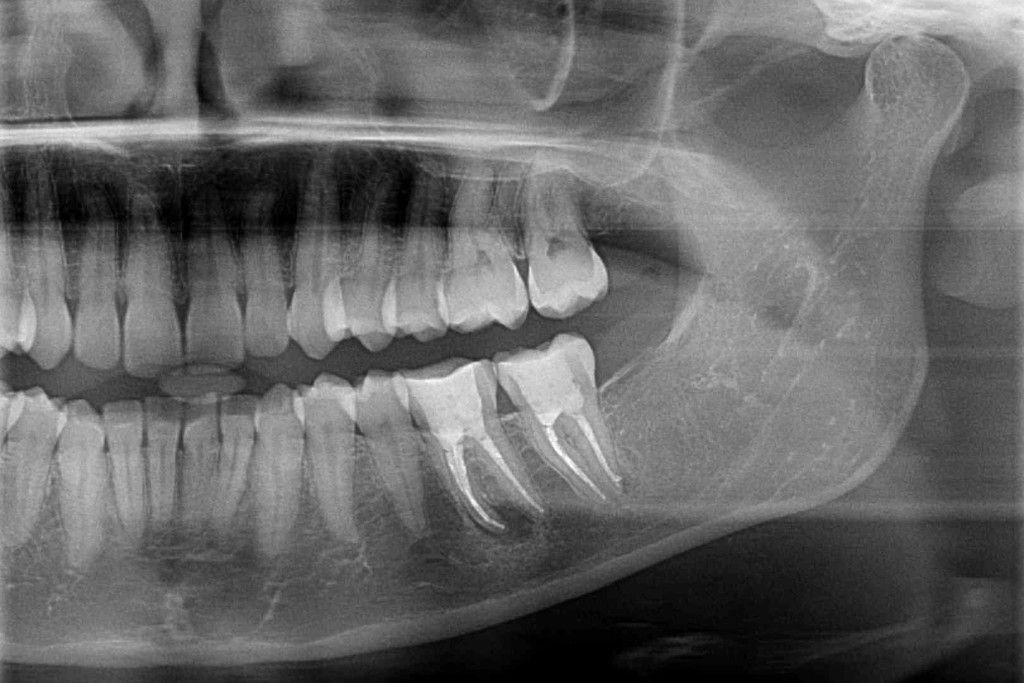 Cysts in the oral cavity are mostly located in the jaw bone, and very seldom in the connective tissue of the gingiva. In any case, they must be surgically removed. Cysts grow, more or less slowly, but steadily, and they can become very large. Their unrelenting growth can deform and destroy the jaw bone and damage nerves. They can become inflamed, turn into abscesses or even become malignant tumors. Here’s the good news: Not every bulge or nodule around the gums is necessarily a cyst. On the contrary: Genuine cysts, luckily, are quite rare.

What is a cyst?

Cysts are cavities in the tissue that are surrounded by a sheath of epithelial cells. And what does that mean? To explain, we must first give you a little background information… There are four different kinds of cells in our body that have the ability to form the four basic kinds of tissue: connective tissue cells, muscle cells, nerve calls and epithelial cells. While you have surely heard about the first three, epithelial cells are sort of less known.

They are specialized in forming inner and outer body surfaces – skin, mucosa, mucosa of the stomach and intestines, the lining of the blood vessels, urinary tracts and respiratory tracts – to name the most important examples. Important bit of information: The cells of the dental lamina that differentiate into the tooth buds during the fetal development are epithelial cells, too. Epithelial cells tend to stick together very tightly, as they are meant to shield the tissue below the epithelium from what is on the other side (the outer world, the stomach…). Certain types of epithelial cells are specialized in substance transport, production of sweat, mucous, enzymes and other gland secretions. Skin and mucosa are constantly regenerating. Thus, epithelial cells potentially show a lot of division activity, too.

These properties of epithelial cells, useful as they are to help these cells so what they are meant to do, unfortunately favour their transformation into cycts too. Epithelial cells don’t belong in other tissues. Whenever some epithelial cells find themselves accidentally scattered into, e.g., connective tissue, they may be triggered to multiply and form a cavity in the tissue: a little “body surface” where none is supposed to be. Secretory activity of the epithelial cells can fill that cavity with mucous or sebum. If the content of the cavity is more concentrated than the fluid in the surrounding tissue, water is osmotically drawn into the sac, increases its internal pressure and makes it swell, slowly but steadily, like a little ballon. This sac with its surrounding epithelial lining is called a genuine cyst. There are so-called pseudocysts, too, cavities in the tissue with a lining made of connective tissue cells. These pseudocysts are considered to be mostly harmless. However, only a microscopic examination of a tissue sample can tell whether a growth is a cyct or a pseudocyst. And, since a pseudocyst is not a particularly desirable thing to have either, surgeons generally don’t make a difference between these two, removing them all the same. The exact type of cyst or pseudocyst is usually determined only after removal of the cyst by a histopathological exam of the cyst lining.

How does the cyst get into the jaw bone?

Cysts in the jaw bones most commonly grow from remainders of the odontogenic epithelium of the fetal dental lamina that organizes tooth development. Each tooth bud is surrounded by odontogenic epithelium (and by the tooth sac that originates from connective tissue). The periodontal membrane of each fully grown tooth still contains fragments of the odontogenic epithelium, and those fragments can become the origin of so-called odontogenic cycts. There are non-odontogenic cycts in the oral cavity, too, however, dentists see those so extremely rarely that they simply don’t concern us in this context. So, if everybody has this epithelial rests, why do cysts develop only in some cases? There is a genetic predisposition for the formation of some types of odontogenic cysts: In some people, the epithelial cells simply appear to divide and multiply more readily. Often, however, cellular messenger substances that are released during an inflammation caused by bacteria in and around the tooth may be the initial stimulus that triggers cyst development.

The most common jaw cyst is the radicular (or periapical) cyst. It is “suspended” from the root apex, rarely also from a lateral root canal exit, of a devitalized tooth, and grows from there into the jaw bone. The cyst development is triggered by a bacterial infection and inflammation of the dental pulp that has been progressed down to the root canal exits.

Follicular (or dentigerous) cysts are the second most common jaw cysts. They are formed from the tooth sac and the enamel epithelium surrounding the crown of an unerupted tooth. Follicular cysts may be caused by a developmental disturbance or by inflammatory processes. Most often, they grow above the crowns of unerupted wisdom teeth or retained teeth (teeth that are prevented from erupting by lack of room or displacement).

Like dentigerous cysts, periodontol cysts develop from rests of the enamel epithelium. They are located laterally at the roots of vital, erupted teeth. Their formation is triggered by inflammatory processes in deep gingival pockets.

Keratocysts are quite rare, they are the result of an anomal transformation of the dental lamina in the initial stages of tooth development. Since tooth development is canceled in a very early stage, keratocysts are not visibly associated with a tooth. Keratocysts are benign tumors. They don’t form metastases. However, when removed, they may regenerate from the tiniest bits of leftover epithelium.

Diagnosis of a cyst

Cysts in themselves are not painful and are often noticed only when they are quite large and cause swellings or a sensation of pressure, or when they develop a secondary infection and become inflamed. This is why small cysts are mostly a chance discovery on X-ray photographs that have been taken for other reasons. On X-ray film, they present themselves as dark blobs in the jaw bone with well defined, light colored outlines. For radicular cysts, a tooth root will protrude into the sac of the cyst, for dentigerous cysts, the cyst will surround partially the crown of a retained tooth.

Large cysts tend to displace the roots of neighboring teeth, which will be clearly visible in an X-ray picture, too. Large cysts cause a swelling in the region of the jaw bone. Depending in the location of the cyst, the swelling may occur inside the oral cavity or on the outside, and it may be accompanied by a feeling of pressure. Growth of the cyst causes the jaw bone to retreat, and large cysts may only be covered by a thin layer of bone. Slight manual pressure will slightly deform the bone layer, causing if to produce a crackling noise (“eggshell, or parchment crackling”). Large cysts that have grown beyond the jaw bone and are not covered by a bone layer anymore can be felt as a hard, but fluctuant lump.

Treatment of a cyst

Genuine cysts hardly ever resolve themselves, and they cannot be shrunk by pharmaceuticals, either. The only treatment options are surgical. The minimum goal of treatment is to stop the growth of the cyst and to give the jaw bone a chance top regenerate. The most important surgical methods are enucleation and curretage (complete removal of the cyst, possibly removing some of the surrounding bone tissue, too) and marsupialization (opening up the cyst towards an actual body cavity). If the cyst is the result of an inflammation of tooth or gums, the inflammation must be addressed as well. That means elimination of pathogens from infected root canals respectively gingival pockets.

Smaller cysts are completely removed by enucleation. A flap of gum tissue will be created, a window cut into the jaw bone, and the cyst will be thoroughly dissected from the bone. It is very important that no traces of the cyst’s epithelial lining remain on the tooth, as they could grow into a new cyst. For this reason, the standard protocol for enucleation of a radicular cyst includes a root tip resection. Retained wisdom teeth associated with a follicular cyst are removed, too. However, if the follicular cyst grows on a retained canine

or other “regular” tooth, orthodontic measures are usually taken to try and “nudge” and integrate the retained tooth into the dental arch. The surgical enucleation is concluded by replacement and suturing of the gum flap. The blood clot in the remaining cavity induces the regeneration of connective tissue and, later, bone substance. To insure the regeneration process, large cavities are sometimes injected with extra blood or an absorbable filling material like gelatin or bone substitute.

Very large cysts are prone to problems with tissue regeneration after enucleation. Smaller cysts might be located right near a nerve, posing the danger of nerve injury during enucleation. And sometimes, damage to neighboring teeth by the removal of a cyst appears likely. In those cases, oral surgeons opt for marsupialization of the cyst. That means, a large opening is created in the cyst that faces towards the next available “genuine” body cavity – either oral cavity, nasal cavity or maxillary sinus. The opening might be secured by a tamponade until healing is completed. A cyst that has been opened up like that does not continue growing and doesn’t press on the jaw bone anymore. The bone gets a chance to regenerate, slowly shrinking the cavity of the former sac of the cyst. The contact with the epithelial mucosa of mouth, nose or sinuses helps “discipline” and transform the epithelial lining of the cyst into ordinary mucosa. Thus, the cyst has been converted into a harmless pocket of the oral, nasal or sinus cavities.

What to do after cyst surgery

Successful tissue regeneration in the former sac of the cyst depends crucially on the integrity of the blood clot in the cavity. To avoid disturbing the wound and interfering with coagulation during the first days after your surgery, you must eat only soft food, must not drink with a straw, gargle or spit out forcefully, avoid physical strain and forsake coffee, nicotine and alcohol (these stimulants slow down the healing process).

About a week after surgery you may start to carefully put some stress on the tissue around the surgical wound. Following marsupialization of a cyst you might face the task of having to rinse the open cavity after each meal – possibly for quite a time after the healing is completed. This is necessary to avoid inflammation caused by food residue fermenting in the cavity. Don’t despair: As bone regeneration progresses, the cavity shrinks and you will eventually be able to do without this measure.

Preventing inflammation-triggered cysts is easy: Go see a dentist and seek endodontic tretment if one of your teeth shows signs of pulpal infection. If you have periodontitis, stick to a meticulous home hygiene protocol and don’t forget to show up at the dental office for your check-up and professional dental hygiene appointments.

Generally speaking, the simple measures that serve to keep teeth and gums healthy are sufficient to prevent cysts, too: Thorough oral hygiene and regular check-ups at the dental office are a good insurance against developing one of those unpleasant growths.