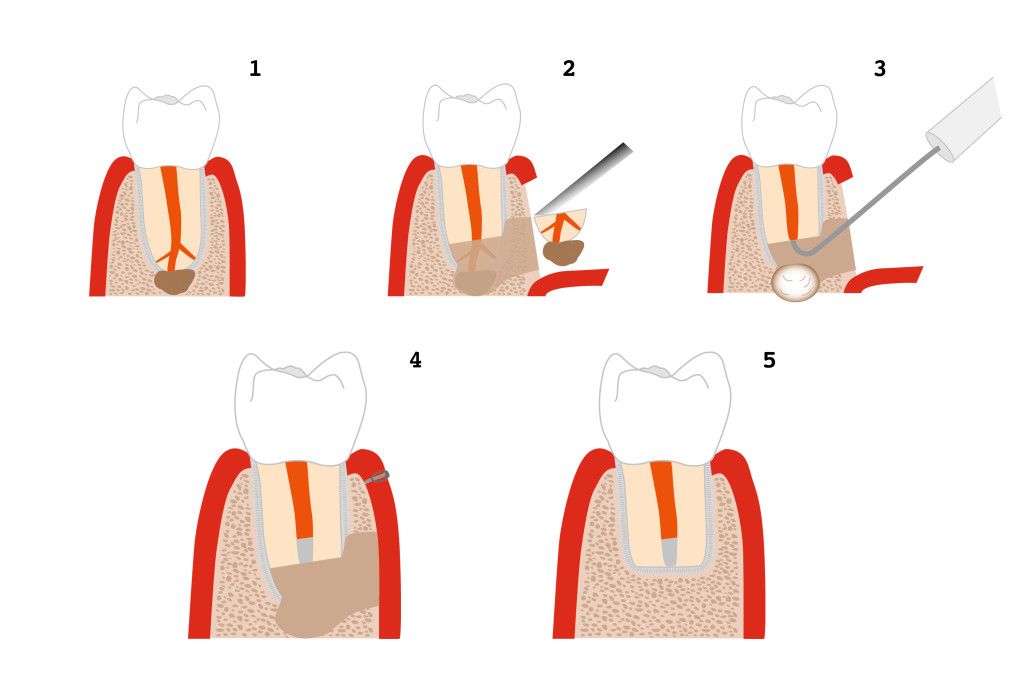 A root tip resection ist performed to clean up inflamed and infected tissue around the tip of a tooth root. In modern dentistry, it is – and should be – a last resort measure that is taken only very rarely. If a root canal treatment doesn’t permanently resolve the symptoms of infection, if pain or swelling reoccur, some dentists rush to do a root tip resection. Unfortunately, that is. Because in nearly every single case a second root canal treatment (a so-called revision) would be the more sensible approach. Our oral surgeon Dr. Arhold is down to about five root tip resections per year, simply because the majority of problems in the dental root region is addressed more reasonably – and with much better prognosis – with the means and methods of modern endodontics.

First things first: What exactly is a root tip resection?

A root tip resection is a surgical method that attempts to treat inflammations of the tooth root and the surrounding jaw bone. The tooth root is not approached from the inside, via opening up the crown of tooth – a dentist’s usual “route” – but from the outside, by cutting a little window into the alveolar bone.

In the interest of a reliably successful result, we perform all root tip resections with a surgical microscope and in strict accordance with the recommendations of the German and Austrian oral surgeon’s professional associations. Usually, local anaesthesia is sufficient to control the pain during the procedure.

Semiconscious sedation or general anaesthesia are options in cases that require more extensive surgery, or for patients who face pronounced fear. As many other surgical procedures in the oral cavity, a root tip resection starts with the “mobilization” of a gum flap above the dental root area. To gain access to the tooth root, the oral surgeon cuts a little window into the now exposed jaw bone. Inflamed/infected tissue around the tooth root is removed together with any periapical or lateral cysts that might be present. Then, the top most piece of the tooth root, about 3 millimetres long, will be amputated. The root canal filling, now visible in the cross section of the tooth root, will be checked for defects and renewed if necessary. The gum flap will be folded back over the area and sutured fast. The blood clot that forms in the remaining cavity in the alveolar bone is the starting point for the regeneration of new bone tissue, and the cavity will close completely in the course of a few weeks.

Short digression: What is a cyst?

A so-called radicular cyst is an encapsulated “bubble” in the bone tissue that has formed from the “sheath” of the root of a dead (i.e. root canal treated) tooth and is filled with tissue fluid or pus. In most cases, formation of a cyst has been triggered by an infection in the root area. A genuine cyst needs to be surgically removed, as it may destroy the jaw bone, move and loosen teeth with its unchecked growth or get infected and turn into a painful abscess.

A root tip resection will be performed to prevent the reoccurence of the cyst from remaining parts of the root sheath. Cysts are diagnosed in an x-ray picture as a light area around the root tip (a so-called apical radiolucency). Fact one: Apical radiolucency usually indicates an inflammatory process in the jaw bone. Fact two: However, this doesn’t always mean a cyst. Actually, the more widespread cause by far of apical radiolucency is granuloma. This comparatively harmless symptom of inflammation resolves itself and vanishes without a trace as soon as the underlying cause (bacterial infection of the root canal system) is removed. This is why the first (and in many cases only) leg of our therapy will be a revision of the root canal treatment. Only if the apical radiolucency persists, will we consider a root tip resection.

We cannot repeat it too often: Pain and inflammation around a tooth that has already been root canal treated do NOT necessitate a root tip resection as the logical next treatment step. These symptoms are the sign of a (recurring) bacterial infection of the root canal system. Bacteria have invaded the tooth through leaky or incomplete canal fillings and enter the jaw bone via the root tip opening.

A thorough revision of the root canal treatment – reopening, cleaning, sterilization and a new filling of the root canals – is entirely the more logical response to this problem than simply “sawing off” the root tip. If the root canals are sealed and the root tip no longer releases bacteria and bacterial toxins intp the jaw bone, the immune system will manage to get rid of the remaining pathogens around the root tip, the inflammation will subside and healthy bone tissue will regenerate. The odds that a root tip resection successfully and permanently addresses inflammatory processes around the tooth root (50-70 percent) are considerably lower than the sucess rates of modern endodontics (90-95 percent). No wonder. If the root canal system is still infested with bacteria, pathogens will soon find their way into the bone again. By the way: A root canal revision treatment can also be performed for teeth that have already had their root tips resected and keep making trouble. In fact, it may be the crucial measure to preserve the tooth after all.

When not truly necessary – that is, in the overwhelming majority of cases that have classically been regarded as indications for a root tip resection – the capping of the tooth root does more damage than good. Very often, the procedure remains unsuccessful and does not permanently clear infections and inflammations around the tooth root. It weakens the bone around the tooth, potentially generating trouble for future attempted implantation treatments. However, in the rare cases where a root tip resection really is indicated (see above), it remains an indispensable item in the catalogue of modern dentistry methods and may ensure the preservation of an endangered tooth.